Do you believe in coincidences?

In 30+ years here around planet Earth I came across situations so difficult to explain that I started feeling like an actor on stage in some absurd comedy.
I’m sure you know that feeling too.

Here some examples of what we call coincidences, stories involving unexpected encounters. 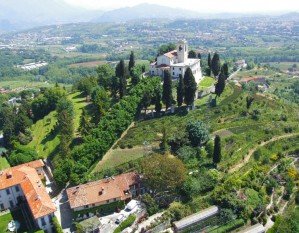 I spent my early teenager years cycling around trees and riversides in green Brianza, the Italian area where I’m originally from.
My friend Biom and me spent countless hours cycling on the road and off-road alike, before we turned 14 and got inevitably hooked with 50cc moppets and motocross motorbikes.

One Saturday we cycled to Montevecchia, a hill that for us was as far and exotic as Ko Phi Phi can be now, looking to challenge the 20% uphill narrow road that goes straight up to the top.
Once on top we could enjoy a fantastic view over Brianza, rest our broken legs and taste some of the Montevecchia typical goat cheese, even if my cynical friend AC observed once – there are no goats as far as you can see from the top.

After this apotheosis, we run downhill on the other side, of what for us was a mountain, passing through a forest with no paved roads available.
Not without difficulties we ended up at the bottom, but lost in the middle of wineries in a place completely foreign to us.
With no idea whatsoever about how to get back home from there, beside indeed going up the hill again, the one bright idea we had was to ask someone.
If only we could see, someone!

Far far away there was a lonely farm, and a man working on a field.
We cycled there to approach him and asked, thinking of doing something funny, if he knew where our far village, Albiate, was.
It turned out that this man knew very well were Albiate was.
He had some kind of relatives living there.
The relatives had a bar selling newspapers.
Well, the family owning that bar was my grandfather family.
Eventually, this man was a remote uncle!

The biggest celebration in Holland is Queen’s Day on the 30th April.
It’s a crazy night and a crazy day where everyone goes in the street and drinks as much as possible, trying to sell all sort of crap you can (not) imagine.
And doesn’t really matter that this is the birthday of the previous Queen and not the current one, because the current one born on a cold day of January and that’s no good for party. 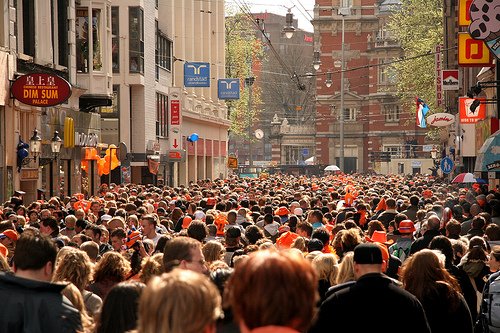 You wanna meet someone in A’dam at Queen’s Day? Can be real difficult, everything is packed.

Last years I met with few friends on Leidseplein, and then I was texting our friend Mouw that was on a different part of the city called Jordaan.
After some SMSs like “are you joining here?” “no I’m there” “OK let’s talk later” etc. etc., unexpectedly someone proposed to go to Club Candela, a terrible Latin place with a vague crowd of troubled souls, basically like any other place around Leidseplein.
We enter this hellish club and after few minutes ta-daaaa, Mouw appeared out of the blue!
I think it would have never had worked out if we made an appointment.

Last year I visited for work United Emirates.
I was bored of the shopping lifestyle of Dubai (pronounced DO-BUY) so I took advantaged of the weekend to check out some Salsa places recommended by my friend Stui.

After a very long taxi ride with a driver that was trying to convince me to go directly with prostitutes avoiding Salsa, I was left in front of this Savage Garden club all alone.
After I took care of the formalities like pay 100 Dirham  to the bouncer and get rid of the jacket, I enter the dance room with the usual thrill of excitement I have when I’m in a place I never been before and I absolutely know nobody.

With the corner of my eye I see a girl walking up the stairs that remembered me someone I know – one of those deja-vu’ that we all learn from Matrix movie to interpret like changes in the software, so I think about Neo and I move on.
Well, next time I saw her again I couldn’t not believe that in this Salsa place in Dubai, a city with 2 millions people, there was actually the girl I knew from Holland!

We were both pretty surprised but after all we know that Salsa people like to go out dancing anywhere they are, right?

The next day, Saturday, I woke up late and decided to take the modern Dubai metro system to get to the tallest building ever built: Buju Khalifa, some 800 meters of skyscraper, about 200mt higher than the previous record.

Dubai metro system has 3 fundamental characteristics: it’s modern, it’s huge and is engineered in a way that you have to walk a lot to reach the railways.
Trains arrive every 10 minutes, so after few minutes I step into the wagon that opens its doors in front of me.
I turn right, and there she is, the same girl!!

She still believe I’m a stalker.