After some days in the same city something magic happens, you feel like you’re not visiting anymore: you’re living it.
You know the surrounding, how to move around, directions. You get more comfortable and soon you notice things you couldn’t grasp before, when your nose was on a map or on a guide.
And it may happen that you even meet in the metro someone you know, like happened to me. Yes, that was the signal for me to move on.

For the first time since I started my walkabout I found a place I could live in: Medellin.
Why?

But let’s not be fooled by the good things, behind the corner you can easily find people living in the street and very poor areas like every other city in Colombia.

Ask Colombians about what to see in Medellin, and the first and second thing they’ll mention is the Metro.

Thinking about the metro as a tourist attraction may be funny for us, but Medellin is the only city in Colombia with a metro system, and what a metro system!
Clean, efficient, modern. With information in both Spanish and English. To “educate” people they even promote the “metro colture” with practical notions as well as a beautiful “Smile! This is also part of the metro colture” slogan. 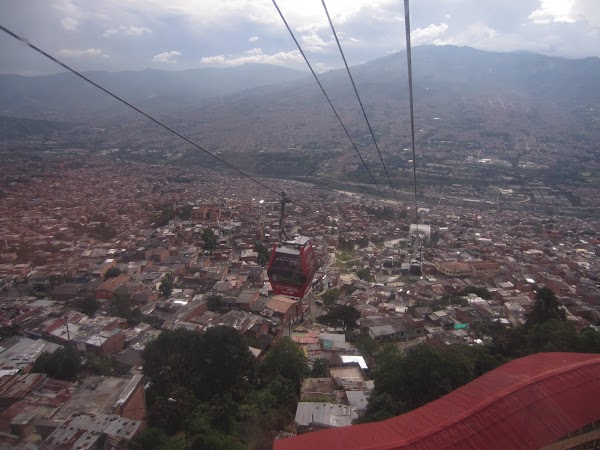 Medellin lies on a valley, surrounded by hills paved with the city suburbs.

As part of the metro system, and without additional cost, there are 2 cable cars going up the hill over the city getto and providing great views of the city.

A day-trip outside the city is well worthed to visit El Peñón and Guatape’.
El Peñón is a wonderful lacustrine area where seems like a huge meteor fell from the sky: words are useless, check the photos of this granitic 200m (660f) tall monolith and surrounding area!
Climbing the rock in a sunny day is demanding but the view is breathtaking. 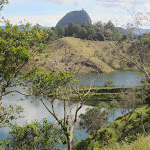 what’s that big rock there??

Each building has the facade’s lower wall painted in bright colors with images representing the product sold by the shop, or the activity done in the place…

All the pictures from El Penon y Guatape’ are online here. 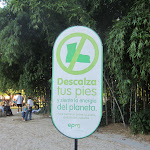 I couldn’t believe when I read about it. In a city devastated by the drug cartel just few years ago, a public park inviting people to walk around barefoot??

The “Parque de los Pies Descalzos” is much more than this.
It’s a place where walking barefoot is promoted as a way to relax and improve the wellbeing in accordance with the reflexology alternative-medicine.
Guided tours running every hour take you for a walk (barefoot indeed) on different surfaces: gravel, sand, grass, water, focusing on the different feelings that our feet are not used to perceive, trapped as they are into boring shoes.

Finally someone that takes seriously the barefoot subculture!

OK, let me start saying that I never did cocaine and that I consider drug dealers as criminals.

(Never the less I hope one day the majority of people will agree on legalizing drugs, and government will act upon that)

In case you don’t know Pablo Escobar was the uber-famous “lord of drug” on top of the Medellin cartel.

Brief story: shipping cocaine to US and cashing back something like 10.000.000USD a week, by the time the police and governments realized what was going on with this new (by then) form of illecit traffic, he was way too rich, influential and powerful to be stopped.

With his business ability, ruthless and violence Pablo Escobar made his way to politics and into the Colombia’s Congress and even offered to pay off the Colombia national debt!
With his money he built an entire popular area of Medellin, making lots of friends ready to vote for him.

He got killed in 1993 during a military operation to catch him.

This controversial tour, advertised in the hostels, brings you to visit some “historic” places like the Escobar family grave on a private cemetery, and the house where he got shoot… house that funny enough is now occupied by an happy family saying “Buenos dias” to visitors every day!

Last stop is the best: the house where the brother Roberto lives with his son Nicolas.
They’re kind of building up an unofficial Escobar museum, putting together some pictures, a motorbike and a car supposedly owned by Pablito.

Salsa is for everyone, no?

I found the tour interesting and informative, but as I said at the beginning, I don’t suport or idolize those people so be aware that this is not a classic tourist attraction (nor the municipality wants to create a tourism around it).
During the years of the Medellin cartel, those people made Medellin one of the most dangerous place on Earth and I did met and talk with a girl who lost his father, a taxi driver, shooted during the drug war.
The subject of Pablo Escobar is very sensitive for people in Medellin and the history very recent.

All the photos from Medellin are online here: