After one month in Buenos Aires and 10 days in Uruguay, I took a 10 hours bus from Montevideo returning into Argentinian territory, where I visited the area of Cordoba and the mighty Iguazú waterfalls.

This is just a small part of the whole Argentina. The country is big (ranks number 8 for size) and moving around means long transfers I didn’t want to have.

What is a secret however, is why they are so beautiful. I asked every men I spoke to. They confirmed that girls are tan bonitas but nobody knew why.
One guy in the hostel told me because there’s the university. The man that changed my blue dollars said it’s because of the weather. Nothing makes sense but it’s true: rosarinas are beautiful.

And the good news don’t stop here. Rosario seems also a great place to live. There’s plenty of art, universities and cultural activities. The costanera, the area in front of the Paraná river, it’s beautiful and has an open theater, bar, restaurants and an area with BBQ to rent (!).

For the visitor it doesn’t offer much. I checked out the enormous monument to celebrate the Argentinian flag, had lunch on the riverside and passed by the house where Ernesto Guevara de la Serna was born the June 14, 1928. A small sign commemorate that, but the house is now occupied by another family tired of asking the same questions to tourists.

The city of Cordoba remembered me how different a travel experience can be.

The cathedral is impressive and even more impressive is knowing there was a clandestine detention center right next to it. 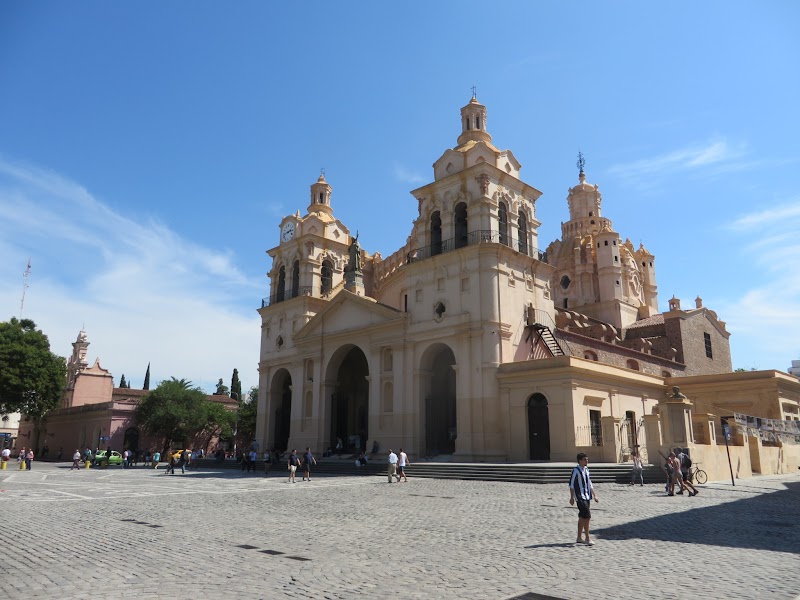 I visited both and I recommend the Memorial Museum to understand more of what happened during the dictatorship in the 70’s. The street where it’s located has lines with pictures of the desaparecidos, the people kidnapped and most likely killed by the military.

On Wednesday evening I joined a CouchSurfing event called Italiano in Piazza. A dozen Argentinians meet weekly to practice their Italian language!
Many of them have Italians ancestors, that sadly didn’t teach them the language so they would not be marginalized, and want to reconnect with their roots while others still think that it’s easy to find a job in Italy.

I was the ‘italiano vero’ for 10 minutes, before Mario, an high school teacher from Naples, arrived – he was more Italian than me.

A 3.5 hours bus to Capilla del Monte followed by a 20 minutes local bus took me to San Marcos Sierra, another hippie and isolated place.

Unlike Capilla del Monte and Monte Uritorco, in San Marcos there are no UFO but the energy of the place is quite unique.

A place where cars and buses have to wade the river, as the tiny bridge is for pedestrians and motorbikes only.

A place where if you rent a bicycle the owner doesn’t ask for any deposit, name or even a document. ‘You’ll pay when returning the bike’, he said.

A place where a street dog can follow you 4km,  swim with you in Río Quilpo and then back to the village. Wait for you outside of the bungalow and join you at the restaurant. All this for a slice of pizza at the end! 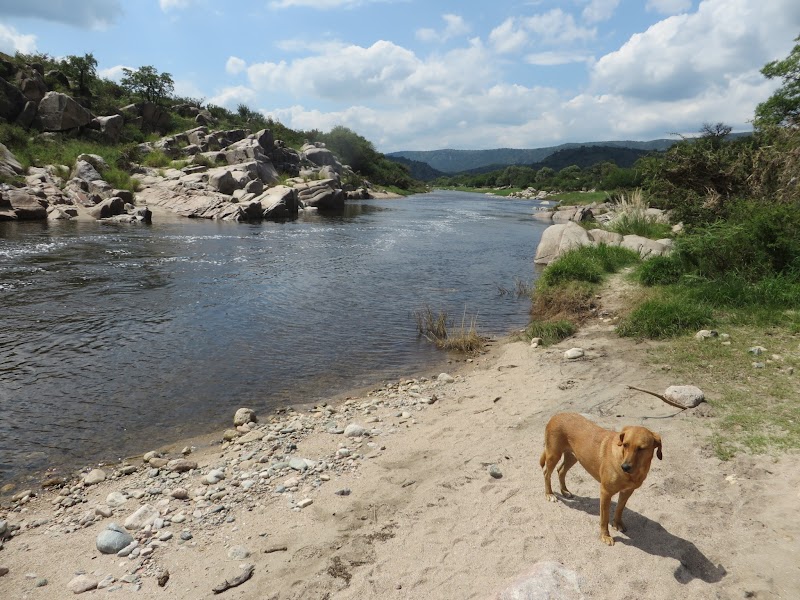 A place where everyone is saying that takes 45 minutes to walk up Cerro de la Cruz when can be done easily in 20. And that’s not the only strange thing happening on top of Cerro de la Cruz.

A place where there’s the Hippie Museum, but was closed because they were on holidays 🙂

Lonely Planet defines it ‘a cultural oddity’ and it’s spot on. Villa General Belgrano feels like being in the Swiss Alps, with a big German influence and plenty of Tirol-style cafes selling artisanal beer.
There’s even a big Oktoberfest every year.

I walked around tie city, visited the tourist office that confirmed me that there’s not much to do (unless you’re willing to hike for few hours), climbed up the stairs of the mirador, and strolled around the small village.

Up in the mountain, the pedestrian-only village of La Cumbrecita is a sleepy places ideal to relax and relax more.
The road reaching La Cumbrecita from Villa General Belgrano is spectacular and remembers me of Tuscany but with more cows.

I arrived in the afternoon and had enough time to visit the waterfall. 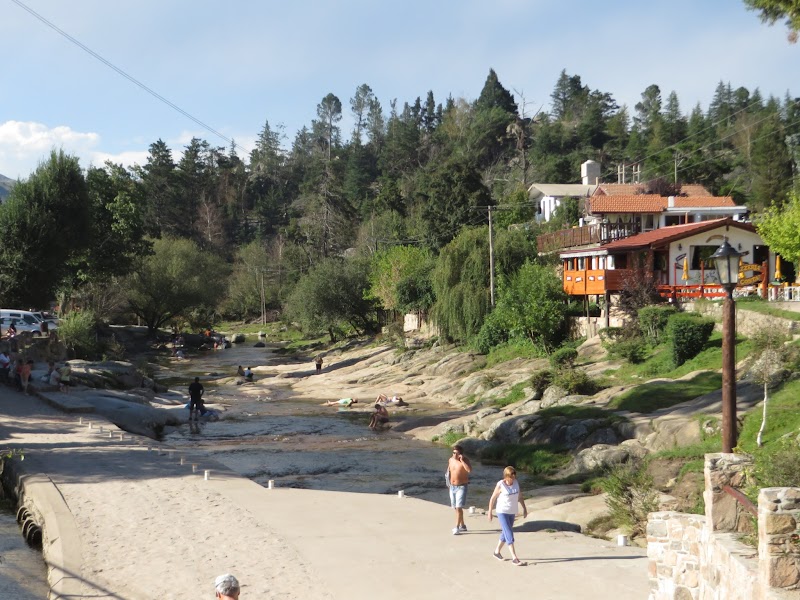 In the evening a strong rain begun and kept pouring down all night till the morning. The scenery from my breakfast table was very different than the day before: 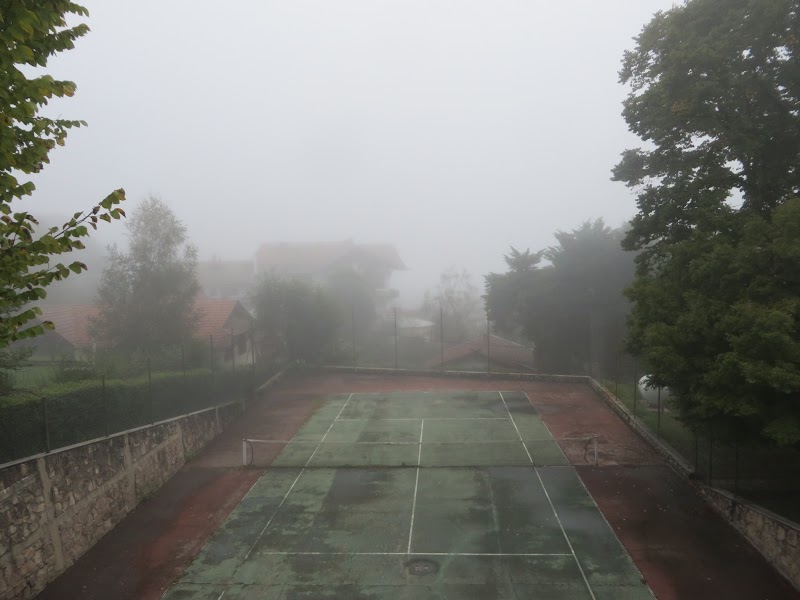 I left around noon for Alta Gracia.

Alta Gracia means something like ‘high grace’ but I didn’t find it pretty at all.

I almost immediately decided that I would not have spent the night there, so I went straight for the main attraction (for me): the museum of Che Guevara, located in the house where he grow up. 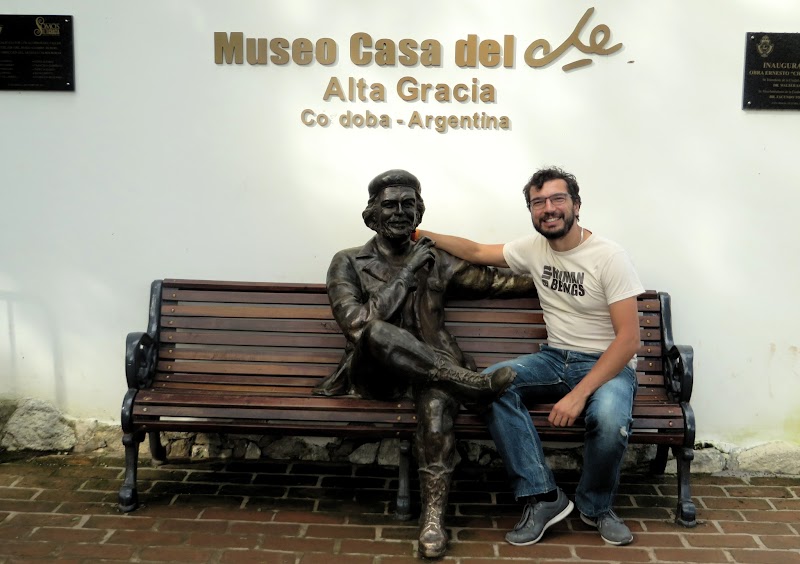 I arrived there with no money and was hoping to find a bank next to the museum, but the Guevara family was living quite outside of the city!
Luckily the man at the entrance door felt sorry for me and let me enter paying the price for Argentinian citizen: 15 pesos instead of the 75 (~$9 USD) that foreigners have to pay.

I found it quite funny, considering the ideals Che Guevara was after! He fought in Cuba, Congo and Bolivia and now the citizen of those countries have to pay more than Argentinians to visit the museum.

Another highlight of Alta Gracia was the anti-Dengue fumigation going on in the city park: on a Saturday afternoon, when the park was full of people and kids, just to make sure everyone see that the local government is taking actions after the cases of Dengue reported in the area of Cordoba. 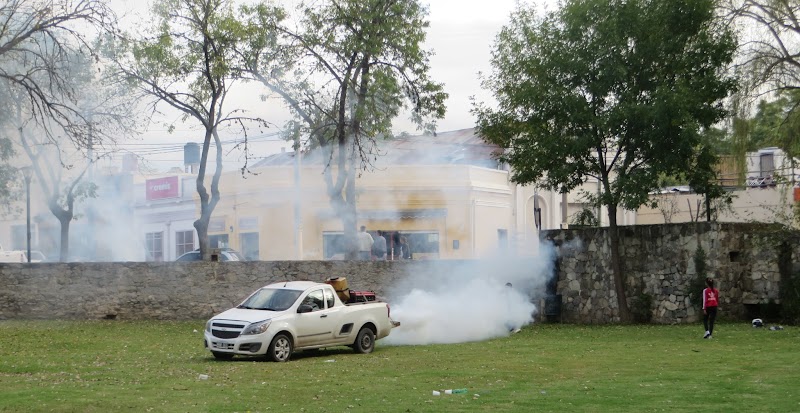 From Cordoba I took a four hours flight to Puerto Iguazú, much more than required because it stopped in Salta but c’est la vie.

I visited both Brazilian and Argentinian sides and to answer the question everyone make of ‘which side did you like the most?’ I say Argentinian because I could feel more the dramatic power of the elements, but in Brazil there’s a better panoramic view of the waterfalls. 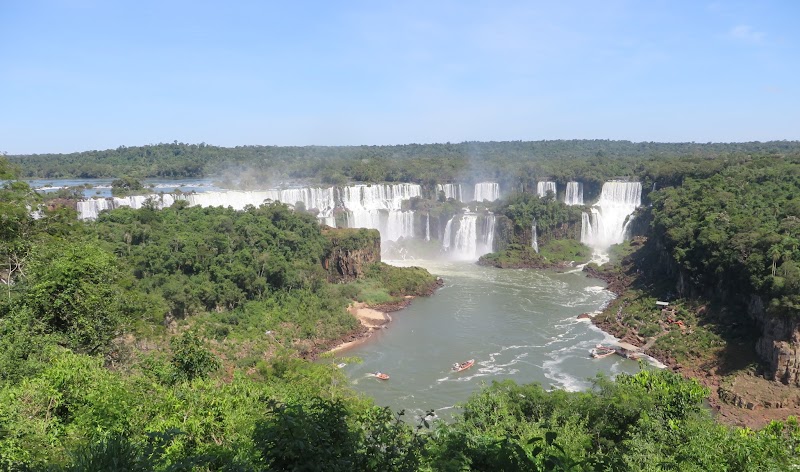 The Brazilian side gives the best panorama on the whole complex of 275 drops, that are extending for much more than my camera can take it. 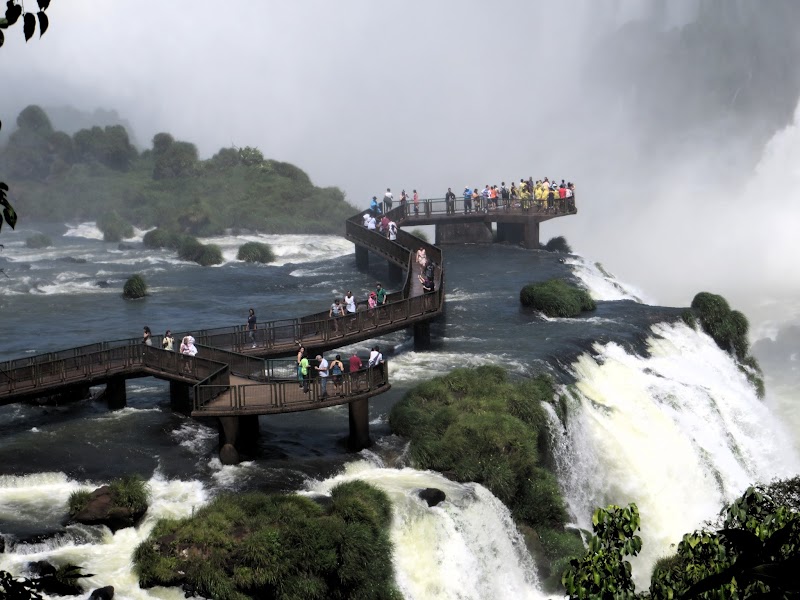 Walking the trails to get closer to the water is an experience of trust in civil engineering. But OK, the structure stood still and I could get happily wet next to the point where the water drops. All around: plenty of rainbows. 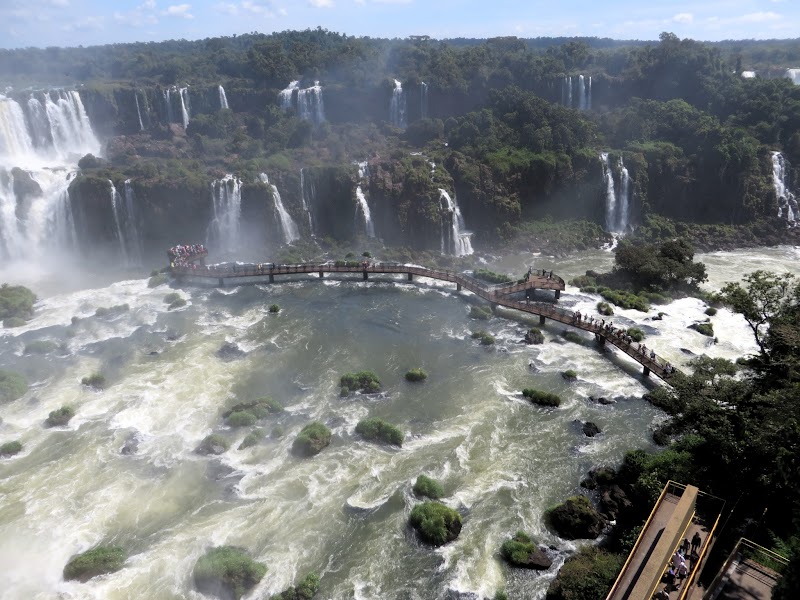 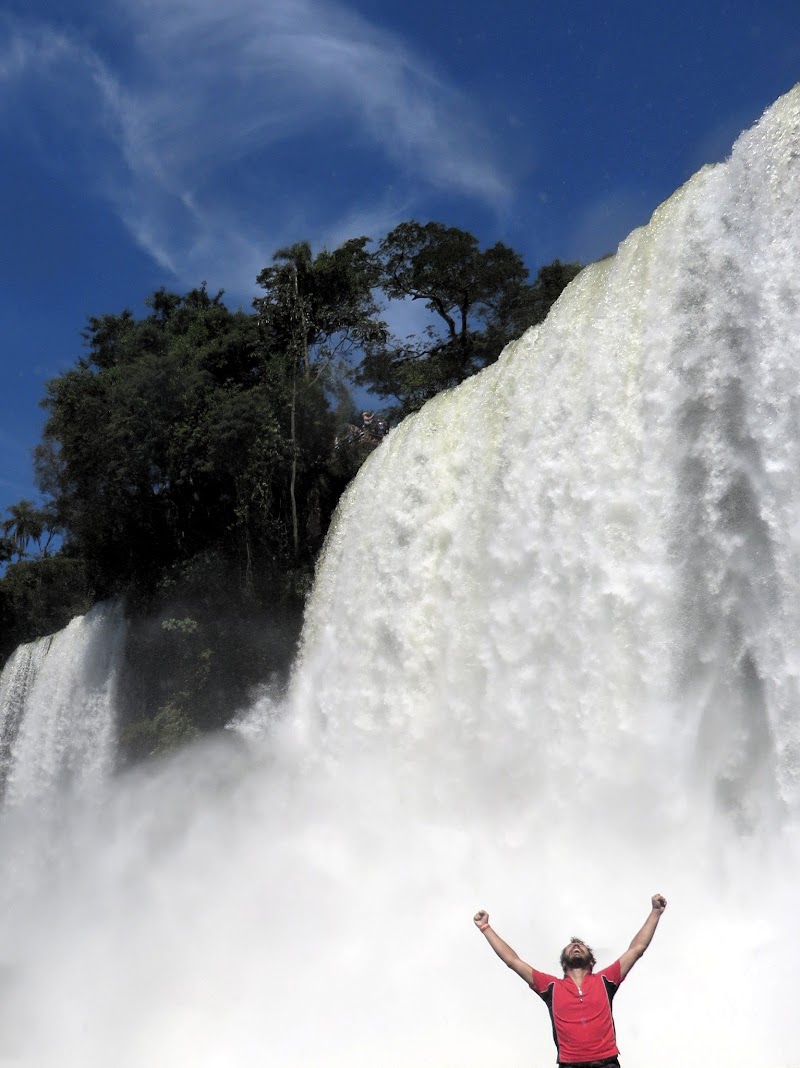 The Argentinian side gets you close to some amazing spots. The picture above seems photoshopped, but there are platforms that get you close enough to the water to get wet, well, super-wet. 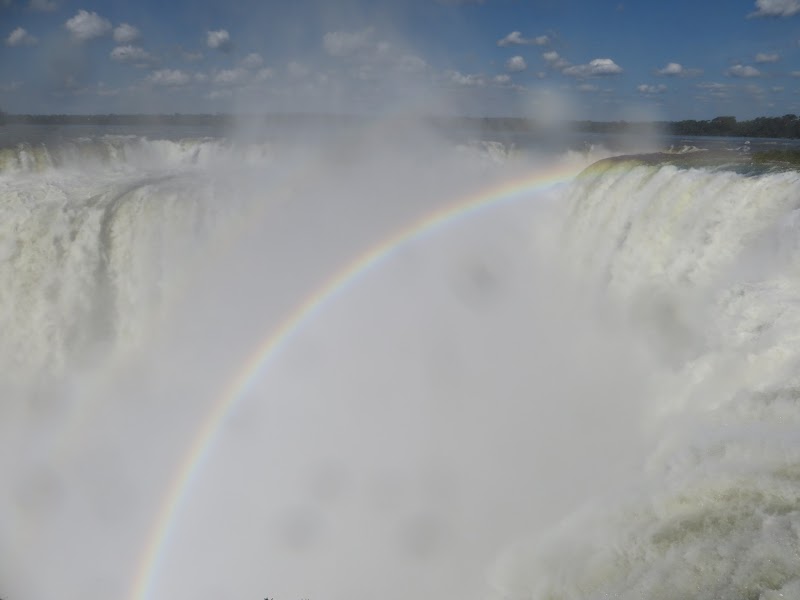 I visited the garganta del diablo (devil’s throat) as last, tired and without expecting much. This point is above the waterfalls, and there’s a long walk on suspended walkway to get there. I could not stop thinking about the first indigenous navigating the river and suddenly arriving at the waterfalls.

The river forms actually a large lake in that point that gets swallowed in the huge hole in the ground that forms the 200+ waterfalls of Iguazú.

The fall is so hard that the splashes of vaporized water come back up as clouds. The force of the element is breathtaking. The feeling of powerlessness overwhelming.

From Iguazù falls, I took a flight back to the capital for the last nights in Buenos Aires. They accounted staying as a guest in the Chacarita area – where tourists don’t venture, a cumbia concert, and a huge mishap causing me to fly back in a direct flight, of course business class, and of course paid by Argentinian Airlines (or in other words, paid by all the Argentinians since after being privatized, the national airline went back to be a public company years ago to better serve the citizens).

But that’s another story.

All the pictured here: