In the last months I insisted focusing in the morning routines. Maybe thinking that changing how a day starts, will impact the rest 🙂

After having changed the shower procedure to a greener and healthier one in “morning shower revolution“, I started a 5-minutes exercise routine from the Yoga world, called “Sun Salutation” (Surya Namaskar in Sanskrit) that I will post about later. 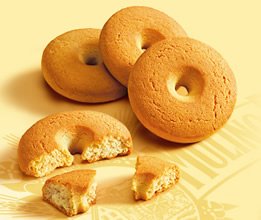 At the same time, I revisited my 30+ years old breakfast tradition… a very Italian tradition: a cup of hot milk with honey, and cookies dipped in it. Lots of them!
And not just cookies, I love Macine from Mulino Bianco, that I bring here in large quantities every time me or someone is coming from Italy.

Who saw me having breakfast here got surprised and/or amused by it, mainly because the “sweet” breakfast is not common in north Europe (and in Mexico too) 🙂

I thought I could never ever adapt to live without a sweet start of the day… so I had to prove me wrong! I can adapt and change. That’s fundamental for living well.

Beside that, this breakfast is high in carbohydrates and in the last months I have been trying to reduce them to see if I could get rid of some body fat %.
OK, I don’t have much f it anyway but I started wondering if I will ever see my 6-pack abs in my life. And even if I have one or if it’s just a marketing invention from diet companies 😀

So I reduced the pasta, reduced the bread, tried to reduce the pizza (c’mon, once a week is the minimum to keep Italian passport!) and then I had to face the truth: my breakfast if bloated with carbo and I have a layer of cookies covering my abs. (I wish I had a picture to show what I have in mind). 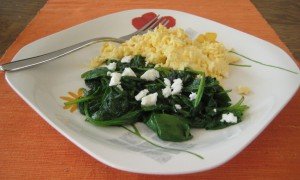 So,  inspired by the controversial Tim Ferris’s book “The 4-hour body”, I replaced my breakfast with spinach and scrambled eggs.

If sounds terrible to you, I have been there.
I has think for ages that eggs for breakfast was a barbarian habit 😀

Many people I spoke with horrified for 2 reasons.

The first one is: do you eat eggs every morning??
Yes, that’s correct but I total 3 eggs white (high in proteins) and 1 egg yolk (high in fat and cholesterol).

The second objection is: this must take lot of time to prepare!
Define a lot, it requires more time than warm up a cup of milk with the microwave but it became a solid procedure of 3 minutes + 2 minutes to wash the pan, plate and tools.

This experiment had been running for well over a month now and became a well established habit.
I lost ~2kg between changing breakfast and reducing carbo, but more than the weight I must say that I feel less swollen and more than a person noticed the difference.
I sometime miss starting the day with something sweet, but I had stopped buying milk completely and this turned out to simplify my groceries.
In fact milk doesn’t last for more than a few days in the fridge, and it was difficult to don’t waste it because of my business travels.

While I’m still not convinced that eating eggs every morning is the healthier choice, I believe it was a good thing to step out of my old breakfast to reduce carbo… if nothing else, I can stop importing Macine from Italy and wasting cows’ milk!

And you, what’s your breakfast?