First the smell of the trucks leaving Attapeu, then the smoke from the fires that seem everywhere in this season, and finally the dust of the road under construction while we’re hunting for waterfalls, today has been definitely the dirtier of the Bolaven Plateau loop!

In between an Internet fix and another Vietnamese coffee, we left an already excruciating Attapeu around 10:42 in direction north after having seen nothing around it.

At Bane Beng we turn left on the road to Paksong, where we started looking for the Tad Alane waterfall that was very much recommended by the Belgium Frenchy of Miss Noy.
We took the so called “new road” just completed, running between the mountains, but to be honest they still have quite some work to do over there!

The paved road is alternating with different levels on “unpaved-ness”:

We become progressively dirtier, but I find roads under construction very charming.
Big cranes, caterpillars, trucks and all sort of machinery are making disappearing what we experience today in matter of few weeks or months.
Future travelers will have a different experience!

We found Tad Katamtok thanks to a random encounter with a couple of fellow travelers. They were also confused because between new road, old road, non existent signaling and unseen temples, it’s really not easy to find those damn waterfalls!

Tad Katamtok waterfall is more than 100m tall and quite spectacular.
We tried to find a trail to reach the base of the waterfall, but all the trails ended up in nothing or in some burned tree.

This was the waterfall we were looking for when we found Tad Katamtok, but we were on the wrong road.
After reaching Bane Nong Oy and had a lunch with two French couples also riding around the Bolaven Plateau, I convinced my Travel Coach that we should at least see the best waterfall of the whole loop.
He was grumpy, tired and cocky but he thought me a great lesson: sometimes you have to sacrifice yourself for your travel companion. So we drove back on the “old road” searching for the fata morgana of all waterfalls.

The “old road” is more difficult and completely on red soil. Sometimes we crossed a jeep and we almost could not see anything for few seconds!

To reach the waterfall we followed the sign for “Tayeuukseua guest-house” and when we reached we were puzzled by the signs:

Then a friendly man came to help us. It turned out that they’re building this new guest house and those are the new signs he prepared yesterday!

We left the scooters there and continued walking for 10 minutes to Tad Alang: what a beauty!
The waterfall is impressive, it’s like a giant cave and the amount of water strayed around created a lush surrounding.
With no further ado, here is the video (watch out from the eastern egg!). 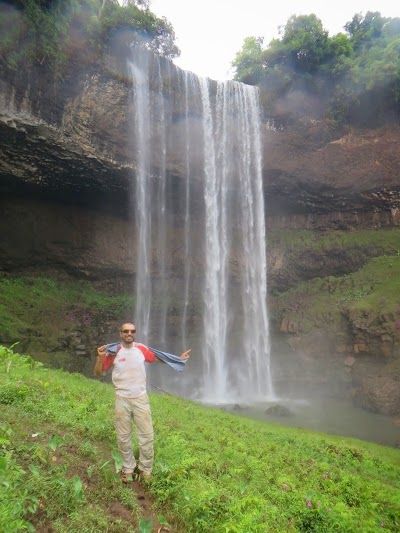 Unfortunately another tough lesson of travel coaching was ahead of me today.

Once back to our scooters, the friendly man asked us to pay 10.000 kip each: 5.000 for the motorbike parking and 5.000 for visiting the waterfalls!
I tried to impress my Jedi Knight, explaining to the friendly man that next time he should ask people to pay on arrival, not after!
I thought that this was good karma and as money is energy, we could have made good energy circulating even if this man was clearly taking advantage of our spiritual enlightenment.

Instead, Cloudio was disappointed by my forgiveness because he had to pay the equivalent to 0.45€ extra.

The lesson was the noble value of justice is more important then money.

Dirty and tired, we were back on the road around 16:33, with one desire: reaching Paksong and have a warm shower.
The air was getting colder and colder and we had to stop twice to add layer of clothes: first a long sleeve shirt, then a jumper. At least I didn’t carry them around for 5 days for nothing!

Luckily Paksong didn’t move, and by 17:37 maximum we could check-in in the great Paksong Thevada Hotel (100.000 kip for a large double room no A/C required as it’s cold here!).