The last day of our Bolaven Plateau loop was a splurging day: fruity coffee, burn coffee, good coffee and kopi luwak coffee were the highlight of the day, topped by excellent Vietnamese food and a pizza.

The 5th and last day of our loop won’t be remembered for the road trip.
The last 50km, from Paksong back to Pakse, were nothing special, confirming that the Bolavan Plateau loop is not really a spectacular motorbike setting.

What made today great, was the best product of Paksong, Lao coffee capital.

We heard about Mr Coffee, a Dutchman living in Paksong running very passionate coffee tours.
A passionate Dutchman?! That was definitely something to experience!

We started early the quest for Mr Coffee and landed at JHAI Coffee House where a couple of Seattleite served us a very special mid-roasted coffee very fruity. It tasted like dirty water at first, but after few seconds the aroma exploded and we liked it!

The place has a very nice concept, it’s a “philanthropic coffee roaster” meaning that all the profits are re-invested into local initiatives of sanitary education for children.

But there were no trace of Mr Coffee here.

Next stop was in a coffee and tea plantation along the way. Actually we stopped because Cloudio felt a disturbance in his force, and we both felt a disturbance in our stomach after a sip of the horrendous filtered coffee.
The producers of the best coffee beans aren’t necessary good coffee baristas, like the best Salsa dancers are not necessarily the best dance instructors, but if you want to learn how to swim you don’t need an hydraulic engineer, so what?

Luckily they saved the face with a delicious green tea. I never heard of coffee and tea plantations on the same spot, do you?

Of course, Mr Coffee had nothing to do with this place either.

We had to drive back 12km, back to Paksong, to finally run into Mr Coffee shop called “Coffee is Coffee”.
The man seemed straightforward like the name of his shop. Coffee is all he needs, and you should not need anything more either when you’re around him!
It was 1pm so we had time for lunch before the daily tour starting at 2pm. He recommended us a simple restaurant and WOW, the place was basic but real value for money! We were convinced: Mr Coffee is the man.

The tour was packed of information, and made look the coffee visit of Don Elias coffee plantation in Salento, in the Eje Cafetero of Colombia a primary school trip. 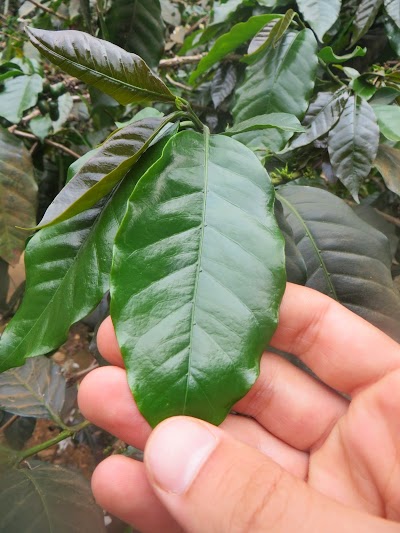 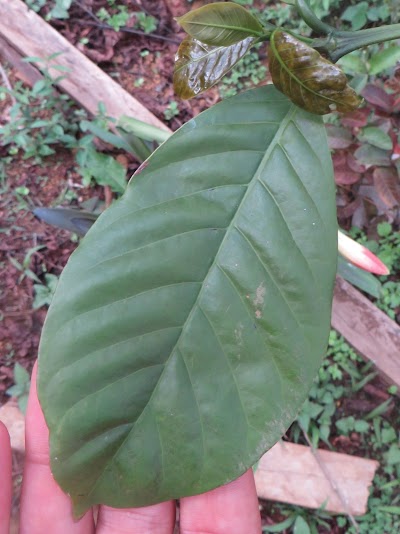 Mr Coffee is not the sophisticated type of coffee drinker over-complicating stuff.

He’s more of the “whatever works” type.
He advocates that the coffee quality is more important than the preparation method used, and recommends to try the same coffee in different machines to see where it tastes better.

He also prefers preparing coffee with Italians moka pots, and he was the initiator of this trend now embraced by all the coffee shops around the Bolaven Plateau!

Our tour around the plantation was interrupted by a good half hour of heavy rain, pijpen stelen regen they would say in the motherland of Mr Coffee. A country he left years ago with destination a small village in the Isam area of Thailand.
“I choose it because there was an hospital and an airport” he said, pragmatic as a Dutch can be.

After the tour we decided to continue the splurging trying one of the best coffee in the world: the kopi luwak,.
Originally from Indonesia, the luwak irreverent cats are also present in this region of Laos and thanks to their digestive system we could enjoy a cup of very heavy coffee that made us feel a bit spaced out.

An ice cream cup and then off to write the last report of our Bolaven Plateau motorbike trip!