From Chiang Mai to Pai

The 130km separating Chiang Mai and Pai, that I traveled on a 125cc scooter, remembered me how great is to drive a motorbike up the mountains.

I had lots of memories and emotions coming up: the Sunday mornings driving around Como lake area with my friends in Italy, the first motorbike my father bought me despite he lost a brother on an accident, the coming back home after many kilometers.

At noon I was ready to rent a scooter from Aya Service, the only service that allows to return the vehicle in Pai, provides insurance and brings your luggage at the destination for just 180 bath/day (~4€).

But if you want to rent a scooter to get to Pai and then back to Chiang Mai, I would recommend renting a scooter in Cat Motors that is a friendly family-owned rental company with great reviews and fast WhatsApp/Telegram service.

But they had no motorbike or scooter available… that was a bad start and I opted for having lunch (having food is always a good option in Thailand) hoping that someone would return something soon.

I was almost convinced to get in a minibus instead, when a group of three Bulgarians arrived, returning the scooters they drove for 6 days around the Mae Hong Son region.

“Take this one, it’s the one in the better conditions! Ride good!” one of them told me, so I did.

Two couples, also renting their own scooters, tells me “Are you alone? Going to Pai? You can join us!” but I don’t want to join anyone. I just want to drive on my own, at my pace, and be selfish.

I stop to the first gas station and found a boiled egg under the seat, is this Bulgarian lucky charm?

The first 15K of the road were just an ‘extension’ of Chiang Mai: a succession of 7/11 markets, gas stations, street stalls, and shop of all sort traversed by a dusty and busy road.

Soon after the road became less crowded both inside and outside, and at km30 I turned left to start climbing the hills. 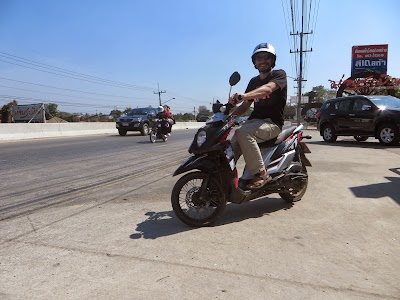 Around 50km from departure, the road got more interesting, with nice corners and good asphalt going uphill and 30km later the air is fresher, and the scenery had change from palms and bamboos to pines. 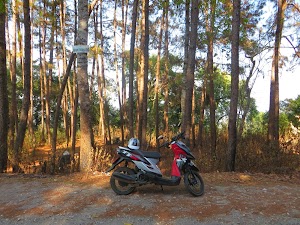 That’s where the real fun begun, driving the little scooter across the hairpin turns… hundreds of them 🙂

But that’s also where the road is more bumpy – there are few holes and irregularities so watch out if you plan to drive here!

Pai is a backpackers town, one of those small places overloaded by young folks looking for cheap fun.

It’s described as a relaxing place where travelers can chill a few days and enjoy the waterfalls, the canyon the hot-springs and few more attractions.

There are three streets and a daily night bazaar with an unusual selection of food including Israeli falafal, Indian naan bread or Italian bruschetta. A sign that there are quite some communities mixed up here. In the streets, I noticed many Spanish hippies and f-hippies (fake hippies), and I later discovered that there’s even a Japanese community living few kilometers outside town.

I liked the canyon, that I visited at sunset with my Dutch teacher, and to be honest I didn’t see much more. I really recommend to visit it at sunset!

To me, Pai seemed a giant hospital.

The most common transportation here are the rented scooters, that can cost as little as 100 bath a day – just 2.2€! Combine this with even cheaper alcohol (you can find cocktails for 50 bath) and the results are quite dramatics.

I haven’t see anywhere else so many injured farang, it remembered me one of those movies about the Vietnam war with soldiers coming back from the front lines.

Only in the beautiful bamboo house where I lodge for two night, the Darling View Points guesthouse, there were three wounded “street soldiers” recovering from their crashes.
Crashes that happened loosing control of the scooter after too much drinking.

Of the rest of the people I met in Pai in just two days, more than a few reported to have been badly sick, with stomach issues and all the toilet-related-stuff, and nobody could tell if they were food poisoned or just drunk too much crap.
Even the great explorer Lindo Boludo got food-poisoned in Pai under mysterious circumstances back in 2009!

After two days in the hospital of Pai – ahi hai! I decided that this was the perfect place for fasting, so I started my first ever detox retreat.