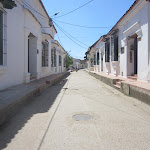 One of my Dutch friend from the Salsa band told me “Mompos is the best place I’ve visited in Colombia!”.

When someone says this about a place, I always wonder what happened to him/her in there.
So I went to check out Santa Cruz de Mompox myself.

The jurney to Mompos

Mompos is located on an island in the Magdalena river, in the Bolivar Department of Colombia.

Last sleep in Barranquilla lasted a short 3 hours, before they woke me up to start the trip.

First a 6 hours bus from Barranquilla to Marangue’, a ride I’m happy I did during daytime as I could enjoy an amazing scenery that remembered me of Tuscany, Italy: green hills, blue sky, cows all around, only the bananos felt a little out of place 🙂

In Magangue’ a chalupa, a small crowded boat, takes you to Bodega in 20 minutes, in the other side of the un-bridged Maddalena river.

From there a shared taxi (collectivos) or a moto-taxi takes you to Mompos in about 40 minutes over a road that seems like a post-bombed Libyian highway.

But guess what, it’s totally worthed. 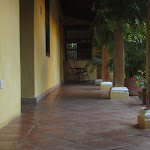 Mompos was for me the perfect place to rest for few week days before hitting another city weekend Salsa scene.

This is a colonial town, once very important but now a fluvial way commercially abandoned.
What is left is a charming town with colonial buildings along the side of the Magdalena river.
A slow place with warm people spending the evenings in their rocking chairs in the street, a terrific chillax factor, and beautiful to look at.

The best thing to do in Mompos is to stroll around the town early mornings or late evenings, avoiding to be cooked by the sun and taking advantage of the sun light to experiment some picture skills.

The second best thing to do is to get into a boat for a guided trip on the Magdalena river, looking for wildlife animals. People who did it were very happy about it – too bad I didn’t had time enough because I was too busy strolling around!

I was out looking for a barber shop that could take care of my beard.
I’m a big believer that going to a barber shop always triggers interesting stories.

And soon after me, on the chair.

Almost done, the old woman asks me how to put pictures on Facebook (el Face, how they call it here).

It took a good half hour to process this question and get to what they really needed. And has nothing to do with Facebook.

This poor couple lost their house last winter, during a flood of Magdalena river. They needed someone to take pictures of the ruins in order to file an official request to get a money contribution from the local government…

While I was happy to take the pictures and help them printing them out in an Internet point, I was amazed by their idea of Facebook, taken from the media.

Isn’t Facebook the place where you put things for everyone to see?

So let’s put the photos of our ruins on Facebook, no? So that an architect could comment on them to estimate the damage, and the major of Mompos could react clikking on “me gusta”.

One of the main lesson from my walkabout is: Facebook is king.
Look at the PCs available in the hostels, and 4 out of 10 are on Facebook. And of the other 6, at least 5 are broken 🙂

The story: MY motorcycle diary

Driving a motorbike in South-America. My dream came true.

And it didn’t required much.

I just said to the moto-taxi driver that I would have jump on his crappy motorbike only if I could have ridden it – and he said Yes, of course, because in his logic means money without work.

The bastard didn’t tell me that the front brake didn’t work doh, causing a dramatic moment (for me) and an hilarious one (for the viewers) in the center of Mompos. Luckily in Mompos traffic is unknown.

And the gears work totally different from what we have in Europe, just to make it more thriling!

And we had a lot of thrill, driving this 40Km (25 miles) of road full of infinite holes, bumps, missing asphalt, missing bridges and dribbling cows (slow but hard) and iguanas (fast but soft).
Reaching Bodega was a relief. I’m not surprised that Che Guevara choose an English bike for his trip.

All the pictures from Mompos are here: