At the end of the first month of traveling I had a nightmare: it was the 1st of August instead of the first of July and I was panicking.

As always happens, the future is never as we imagine and the 1st of August I was more relaxed then ever.
The fact that 2/3 of my walkabout are gone is not affecting me: my mind developed a form of self-protection, declaring this experience as a general preparation for something bigger, some form of permanent vagabonding that takes freedom to a next level.
Minds are funny, aren’t they? 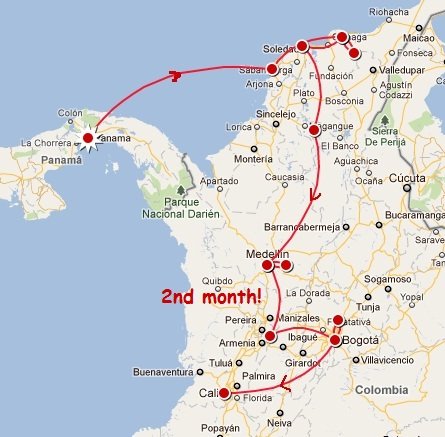 At the end of month number one I was walkabout-ing in Medellin, a city I really liked  and where I spend 6 interesting days.

I realized that the perfect combination for me is to visit little towns in the week-days, and hit the cities in the weekends to experience the best of the Salsa-nightlife.

So after the uneasy decision to leave Medellin I reached Salento, a very little place in the beautiful Zona Cafetera, the coffee region of Colombia with a stunning nature and few things to do.
I experienced horse riding and visited a coffee plantation in there.

3 days and a lost bus later I moved to Bogota’ for the weekend, experiencing for the first time in my life the greatness of being a Couchsurfing guest, hosted by a friendly wonderful local for 2 nights (I’ll blog about this too).

I continued visiting Bogota’ for a whole week, enjoying more the hostel people than the cold and dispersive city itself, and with a day-trip to the amazing Salt Cathedral in Zipaquira’.

It was sad to leave the gang in Bogota’, but I really wanted to hit Cali for the weekend.

For the first time since I started traveling, I reached a place where I immediately felt not like a tourist, but like someone living in there.
The ingredients?  People, Salsa and Yoga!

Cali is amazing, this is my place and I’ll walkabout here for a while, considering that I’m taking classes in caleno style from a great teacher and I’m currently working on my Salsa graduation… 🙂

Seems like I have a lot of posts to write about July!!

It’s difficult to write about Salsa in the other cities when you’re in Cali, the capital!
It requires some mental effort: how was it there?
First of all, Salsa music is big everywhere and you can listen Salsa in every bar and every corner of the cities.

Stop a stranger in the street and most likely he can tell you everything about music and artists from yesterday and today.
It’s kind-of-like stop an Amsterdammer asking about DJ Tiesto…

Dancing is another story – Medellin has few clubs and relaxing moves, while in Bogota’ I found a stronger cuban influence.
Did I say about Cali? No, I didn’t because it deserves a separate charapter, aemh… post.

I keep on meeting people in a fast-forward pace. But with time I became more selective and I developed a natural filter to spend time only with people I’m interested in.

I had a terrible experience in Medellin, where in a party-hostel I found myself surrounded by young groups of Israelis, Americans and an English gang.
I remember a kid spending 4 days in a row playing ping-pong and sniffing cocaine, while his buddies were glued to the couch in the TV room.
As Vito Corleone said to Sollozzo in The Godfather: “It makes no difference, it don’t make any difference to me what a man does for a living, you understand.”… but I got so bored with the ambient that I swear to avoid party hostels for the rest of my trip.

More than the noise at night, the total lack of interesting people killed me, in a city that I enjoyed a lot.

I compensate with locals.

Now that my Spanish allows me to be more confident in conversations, I’m starting enjoying the beautiful Colombian people more and more. They are so friendly and kind that are addictive.

And I got addicted asking whatever indication to random people just to hear them saying “con mucho gusto”, the “you’re welcome” formula they use to reply to a “gracias” that they pronounce slowly, really meaning it, and that sounds 10 times nicer and sexier than the Spanish “de nada!” 🙂

I made a friend in Medellin, Vita. She has been my guide around the city and made me understand more about how is living in this country, with her sharp comments over politics and culture. We laugh a lot and then say good-bye.

The Couchsurfing experience in Bogota’, with the creative and dramatic Ingrid, also put me closer to Colombian lifestyle.

And at the end of it I had confirmation that Italians are more closer to Colombians than to Dutch people, despite the geography tells us otherwise!

Before embarking on this jurney I swear I would have stay away from PCs and Internet as much as I could.
I had this happy idea of using PCs on Internet points 2-3 times a week.

Then I arrive and I discover that almost all the hostels have free wi-fi and PCs available for guests!
I failed big time, but self-regulation and people queuing for the PCs are pushing me to be more efficient with the time spent online, and I came to realize something I forgot during the last years of hard work on the IT business: I love a daily Internet session.

I would have even bought a netbook, if I could find one running Linux instead of damn Windows 7.

But so far I continue with the iPod touch for Facebook and Gmail, plus PC for blogging and more substantial writing with sessions up to max 1.5 hours. Longer sessions make me tired 🙂

I don’t mind sharing how much this experience is costing me, as some friends asked me.

Just remember one more time that I’m traveling on a budget, but at the same time I have savings enough to spend money in the things I like to do, so I’m spending more than 90% of the people I met in the hostels…

Top expenses have been: